Jessalyn and Russell’s love story started when they were just freshman in high school. Jessalyn saw Russell from afar and thought he was cute, later to find out a friend of Jessalyn’s knew him from the swim team. She introduced the two and they began dating shortly after. But sadly Jessalyn’s family moved out of state just a few months into their relationship and the couple eventually lost touch. Years later while in college, Jessalyn got on her old AIM account and happened to see Russell’s screen name online. She said “Hi” and that was all it took to bring the couple back together! Jessalyn moved back to Florida almost 10 years ago and they have been inseparable ever since . . . 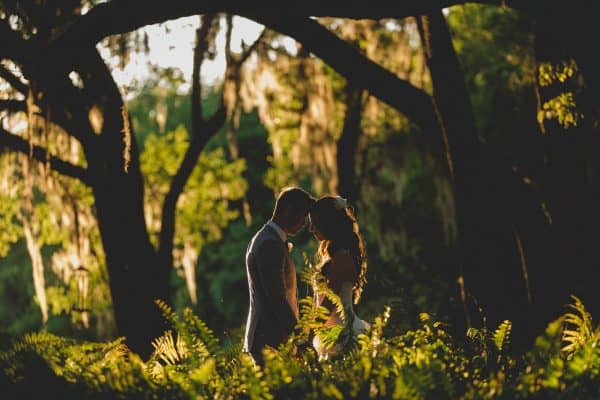 “Russell and I were taking our first ski trip together to Breckenridge, Colorado. He told me the cottage we were staying at was not ready and that he was just going to drive around to waste some time. Little did I know he had planned this situation. He ended up driving us up the very top of this mountain called Sapphire Point. It was beautiful, snowing and overlooked the whole town. We spent some time up there although we were freezing and he then surprised me with his proposal! As we arrived to our cottage, he had set up a bottle of champagne, chocolate-covered strawberries and an adorable picture of us from kids until now stating, “Soon to be Mr. & Mrs. Williams”.”

How would you describe the theme of your wedding?

“We really wanted to do a subtle bohemian theme but then a bit of rustic elegance as well. Very garden style, lots of flowers and light colors. We chose blush and a light grey, along with a lot of white.”

Let’s talk honeymoon! Where did you go?

“We spent a week on the island of Maui, Hawaii, and then another week split between San Francisco and Sonoma, California. We almost did two weeks in Hawaii alone and although we would have loved that because it’s absolutely beautiful there, we wanted to explore other parts of the West coast while we were out that far already. We were really glad we did too. Wine Country was breathtaking and a ton of fun as well!”